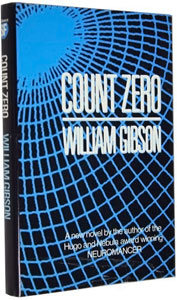 This book wasn’t great.
No offense to William Gibson, but sometimes the “terse” writing style feels less like a unique style choice and more like an afliction (am I using that word right?). It also feels like “typical male sci-fi” in some of the worst ways possible. The kind of “black box” writing where no thought is brought to its conclusion to create “mystery”, but there’s no purpose behind doing that.
It feels like a “dangling participle” in a sentence, but with entire ideas. Some things are presented to the reader like a big question, only to never be answered by any of the characters/actions in the book.
And I get it - some questions don’t have an answer and that’s the point, but if that’s the point, it still surves a purpose - revealing doubt in a character, creating suspense (that is resolved in an unexpected way, not revealing the answer to the mystery, but revealiing something else instead).
Here, mystery is treated as if its mere presense is a signifier of quality.

And here’s the thing, I felt like that was true in Neuromancer as well. But it was less jaring there because the flow of the story didn’t create the expectation that each mystery/dangling idea would be resolved.

Count Zero, on the other hand, has the structure of three separate stories that intertwine in the end of the book. The structure itself creates the expectation that all these incomplete ideas are just the jagged edges of individual puzzle pieces, but when the puzzle is solved - it’ll all fit togetehr in a satisfying way.
It doesn’t.